Gilmour and Aitken Ltd is a leading UK timber business, a family business since 1852.   In its 5th Generation the business is proud of its depth of product knowledge and extensive stock holdings.

Thomas Aitken was born in Greenock in 1822. His early career was spent working in the timber trade in Liverpool and on his return to Glasgow in 1852, he and his business partner, Mr Gilmour, founded a timber importing business. Their new company, Gilmour and Aitken, traded in the quality hardwoods demanded by the booming ship building industry on the River Clyde.

Spotting an opportunity, the company established a saw mill specialising in long mahogany logs (12m and over) for the yacht building industry which also had a firm hold on the River Clyde. Their expertise meant that they were chosen to supply the timber for one of the challenger yachts, Sceptre, for the prestigious America’s Cup matches.

The company traded successfully from its base at Forth Street, Glasgow for many years, even managing to survive both World Wars and the Great Depression. After World War II, Mr Alexander Cameron Aitken’s son Thomas took over and focussed on growing the business. By 1970, when Thomas’s sons, Thomas and Cameron were ready to take the reins, business was brisk and the single acre site at Forth Street was becoming too small.

In 1976 the company moved to a 15 acre site in Alexandria, 15 miles West of Glasgow. The new site gave the company the space to expand at pace and as the business grew, new kilns were installed to further increase the company’s capabilities.

The following year saw the establishment of the Aitken & Howard business division of Gilmour and Aitken to trade exclusively in Guyanese Greenheart and this focus resulted in the company quickly gaining an enviable reputation as a leading supplier for major civil engineering projects in both the UK and international markets.

In 1979 the company set up a home wood mill and greatly increased capacity with a more recent addition of an automatic band mill. A 36″ planer was also installed helping the hugely experienced team to machine hardwood timbers to very precise tolerances for the oil & gas, heavy construction, marine and timber fabrication industries.

To further enhance Gilmour & Aitken’s ability to service its broad and growing range of customers, there have been several major investments since the 1990s.  With the purchase of adjacent land, the overall size of the yard has grown to 17 acres to allow significant increases to undercover storage capacity.

Gilmour & Aitken has grown in a sustainable way for well over 150 years. The current Directors are committed to continuing this trend by ensuring plans run parallel to industry developments and customer needs and expectations. 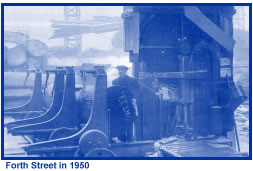 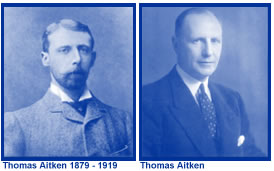 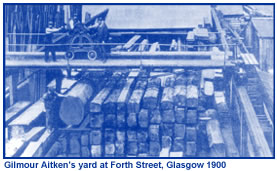